Many die of mucosal disease before two years of age which is characterised by oral ulceration, diarrhoea, pneumonia and interdigital lesions in the feet. It is triggered by the virus mutating into a more virulent form and is rapidly fatal and untreatable. Therefore a single PI in a calf pen can cause severe disease outbreaks in the rest of the group.

In infected herds control and eradication of BVD focusses on the identification and elimination of PI animals as the main risk factor for BVD infection in a herd.

In uninfected herds the focus should be on preventing the introduction of the disease, mainly by restricting purchases of PI animals and controlling contact with neighbouring cattle. The PI animal then infects in-contact animals. Before the introduction of good vaccines, the PI animals were knowingly allowed contact with non-pregnant animals to allow them to be infected and develop natural resistance.

However, this method was unreliable and is not recommended as it frequently resulted in disease outbreaks, reproductive loss and sub-optimal immunity in the herd. Bought-in animals are the greatest risk of disease introduction, either as PI animals or if cows are bought in in-calf, where they may be carrying a PI calf.

Another major risk factor for BVD is the introduction of an acutely infected animal into the herd, such as a purchased breeding or fattening animal, a herd member returning from a show or a hired bull. BVD is significant in terms of reproductive loss and immunosuppressive effect, and several control options have emerged depending on the cattle density and prevalence of disease.

Antibodies to BVD can be easily detected in both blood and milk samples. Antibody tests provide an indication of exposure to BVD virus and are useful when assessing the status of a group of animals at the herd level. Milk samples can also be examined for the presence of BVD antibodies, such tests on bulk milk only provide an average antibody load for the milking herd, however when monitored regularly i.

A rise in antibody levels are indicative that the virus is present within the herd more investigation will be needed See flow diagram. If positive they are most likely PI animals, but there is a possibility that they are transiently infected Also known as acutely infected. In this time, the animal will be positive for virus antigen. In order to prevent misdiagnosing these animals as PIs, they can be re-tested twice after three to four weeks with an antigen ELISA the PCR stays positive for longer and both samples positive for viral antigen confirm a PI.

The main reservoir of infection is undoubtedly the persistently infected animal and, as such, the most critical part of the diagnosis and control programme Brownlie, Persistently infected animals must be removed from the herd immediately Graham et al. For some time now special ear tags have been developed which take a small section of ear tissue into a small labelled container when applying the tags.

These tissue samples can then be tested for BVD antigen. 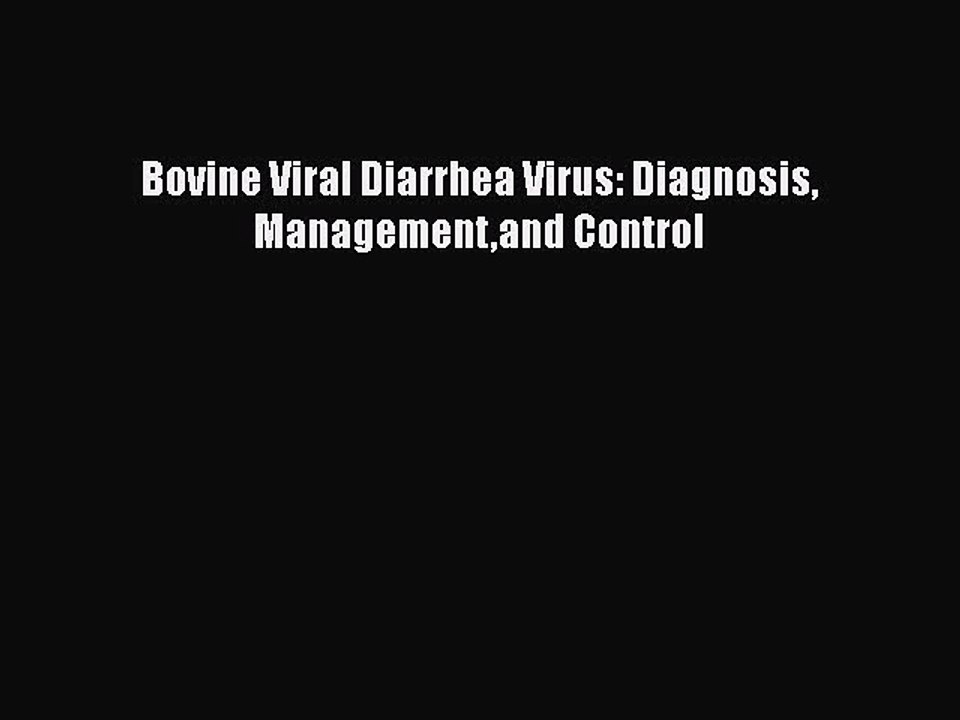 The ear tissue test is not affected by colostrol antibodies and therefore can be done from birth. Main advantages are. Eradication alone leaves a herd vulnerable to BVD, and therefore vaccination should be considered to maintain the herd BVD-free if biosecurity failures are a possibility mainly due to neighbouring cattle contact or buying in stock. Vaccination does not modify the status of or eradicate PI animals. Calves with cerebellar hypoplasia are ataxic, reluctant to stand and may suffer tremors [36] , and ocular pathology often causes blindness and cataracts.

Localisation of virus to the vascular endothelium gives vasculitis, leading to oedema, hypoxia and cellular degeneration. Weak, stunted calves may also be produced by BVDV infection in the second trimester. Infection in the third trimester trimester over days elicits a response from the fully-developed immune system, giving rise to normal but seropositive calves. Foetal infection with a non-cytopathic BVDV virus before days gestation may result in the birth of calves persistently infected with and tolerant to bovine viral diarrhoea virus.

At this stage in gestation, the immune system is partially competent and recognises the BVDV antigen as self, meaning that no response is mounted.

Animals may be undersized and slow-growing, and are predisposed to other diseases. Mucosal disease is an invariably fatal condition of month-old cattle [45]. Disease follows a course of several days to weeks and intially presents as pyrexia, depression and weakness.

Anorexia leads to emaciation, and animals suffer watery, foul-smelling and sometimes bloody diarrhoea. Dehydration ensues. As suggested by the name, lesions are localised to mucosal surfaces. These include the oral mucosa, tongue, external nares, nasal cavities and conjunctiva [31] , where large lesions cause excessive salivation, lacrimation, and oculo-nasal discharge. The coronet and interdigital surface are also affected, causing the animal to become disinclined to walk and eventually recumbent.

Immune tolerance induced by the persistent virus prevents the immune system recognising the superinfecting cytopathic strain: the two biotypes are said to be "homologous" to the immunotolerance. There are several techniques available for the laboratory diagnosis of BVD. These can detect antibody to BVDV or parts of the virus itself.

The serum neutralisation test depends on the ability of antibodies in the serum to neutralise BVD virus and thereby prevent infection of cell culture. The test takes four to seven days and requires cell culture facilities and an experienced observer. Because antibody against BVDV is prevalent in most cattle populations, a single serologic test is not usually sufficient for diagnosis of a recent infection.

Therefore, an increase in antibody titre between paired serum samples must be more than four-fold to confirm recent infection [40]. Viral antigen or RNA can be detected using clinical specimens or tissue samples. Bovine viral diarrhoea virus can be isolated from blood, nasal swabs or tissues to confirm active infection, and demonstration of virus in samples obtained at least three weeks apart is suggestive of persistent infection. The best tissues for virus isolation are skin, spleen, lymph node and segments of the gastrointestinal tract showing ulcerative lesions.

Two samples taken weeks apart will confirm a persistent infection. Immunohistochemistry will demonstrate the presence of antigen in fixed or frozen sections. Viral RNA may also be detected, using PCR for clinical specimens or in situ hybridisation on fresh or fixed tissues [40]. In cases of mild, acute BVD, lesions are rarely seen.

When disease is more severe, the lymph nodes may appear swollen, there may be erosions and ulcerations of the gastrointestinal tract tract and serosal surfaces of the viscera may show petechial and ecchymotic hemorrhages [40]. The pathology associated with mucosal disease is much more striking [31]. Oral, lingual and buccal erosions are observed, and buccal lesions often coalesce to form larger areas of necrosis and sloughed epithelium. Oesophageal lesions present similarly. The gastrointestinal tract often shows characteristic pathology, but post-mortem examination must be performed soon after death so that these are not masked by autolytic changes.

In the rumen, ulceration is less common but, with congestion and oedema, may be seen along the pillars, and papillae can be reduced in size. Several discoid erosions of around 5mm in diameter appear in the abomasum, with hyperaemia of the surrounding mucosa and petechiation of the submucosa, particularly at the pylorus. Abomasal erosions occasionally enlarge and ulcerate.

Oval erosions can be seen along the antimesenteric surface of the small intestine, overlying the lymphatic tissue of the Peyer's patches and measuring centimetres in length. The erosions become larger and more numerous towards the terminal ileum, and the exposed surfaces varies in appearance. In more chronic lesions, food is seen to adhere to the underlying submucosa, and in acute disease the exposed surface is acutely congested and often haemorrhages into the gut lumen. In the large intestine, the mucosal folds may be thickened, giving the organ a striped appearance inwardly.

Petechiation and erosions are occasionally seen along the folds, and the large intestinal contents are watery, dark and foul-smelling.